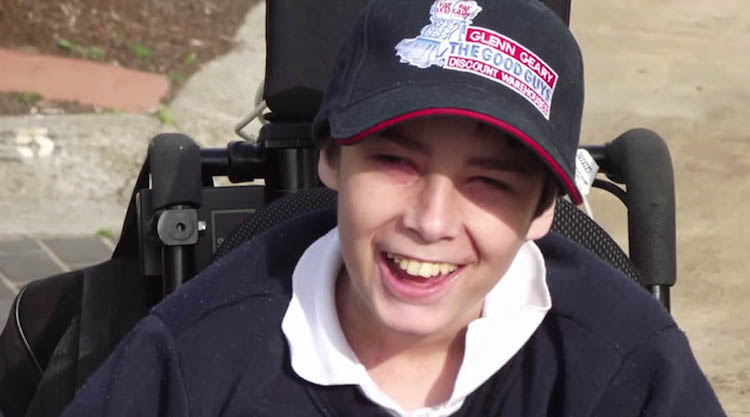 Aaron Jordan and his family worked hard to get the word out about A-T by trying to attract the attention of US talk show host Ellen DeGeneres during her recent visit to Australia.

The family posted this photo on facebook which has attracted over 54,000 likes. The story has also featured on media outlets right across the country!

Jordan’s mum, Brenda has been overwhelmed by the response. “There has been nothing but amazing feedback from all of this. We want to help create awareness for A-T and try our best to get Ellen’s attention and hopefully bring on lots of support for BrAshA-T and support for our A-T families. It has the possibility to raise a lot of money for research. That’s what we are praying for.”

Update from Brenda after Ellen’s visit: We ended up flying to Melbourne and did meet Ellen! All of the information on A-T that I had passed onto her she did receive and told me that herself.

She was very aware of us and knew that we were at her show on Tuesday. We met her on the morning she was flying out.

Her main security guard told me that on Tuesday night he noticed that she had our info card in her hand back at her room (pretty happy about that!).

So she did meet Aaron and apologised for not having more time to spend but did stop for photos to be taken.

She was very nice and I’m hoping with everything she has on A-T that we hear from her in the future. I do believe there is a chance, especially with Ben Affleck and Jennifer Garner being involved in the USA with the A-T Children’s Project.